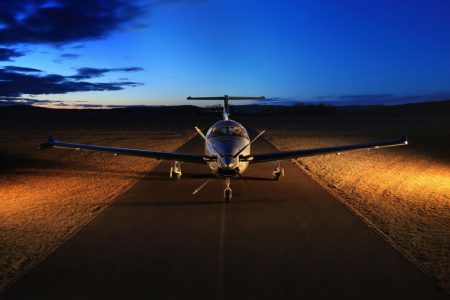 Back in the day when I was flying single-pilot EMS operations in mountainous terrain at all hours of the night, I would have killed for a night vision imaging system in my turboprop airplane. But at that time night vision goggles were only just starting to become popular for our helicopters. One of the biggest problems was night vision system pilot training and checking was that it took FOREVER! It might have been because night vision was so new to the market back then, and not many instructors and check airmen were available. But thankfully, that’s not the case today!

Aviation Specialties Unlimited (ASU) was recently awarded a supplemental type certificate (STC) for a night vision imaging system (NVIS) for the Pilatus PC-12. It makes sense, the PC-12 has the ability to take off and land in undeveloped terrain with marginal runways, making it a very capable aircraft for all kinds of operations.

But I was surprised to learn that ASU also holds NVIS STCs for a number of other fixed wing airplanes. In fact, the Pilatus STC is the 14th that ASU has been awarded for fixed wing aircraft. Have you seen the beautiful Gulfstream G550 with the Enhanced Flight Vision System? Thanks to this system, it can land when most others can’t. The Synthetic Vision Primary Flight Display, with 3D graphics of terrain and runways is enough to make anyone drool.

If you’re interested in pursuing night vision for your aircraft or an aircraft that you fly, ASU has been working closely with operators to continually get new STCs. They are able to minimize aircraft downtime because of their in-house drafting, Parts Manufacturer Approval PMA, traveling NVIS installers, and streamlined STC approval process.

I look forward to the day when night/enhanced vision is standard on all airplanes. When paired with advanced pilot training, nighttime operations may well become as safe as daytime operations.