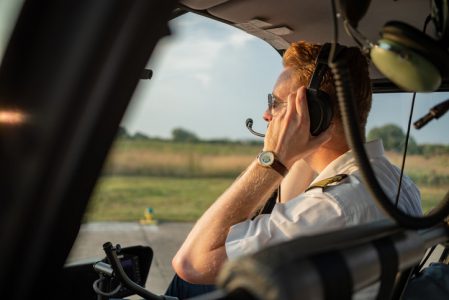 I experienced my first radio failure the other day. It was more like total radio static – but it was enough that we couldn’t hear anything that the controller was saying, so in my mind yes, radio failure. We were at a remote airport with no tower and had called for our clearance on the ground before departure. Uncontrolled airport radio communications are hard enough, throw in a radio failure and we had our hands full.

The weather was not great, but not terrible either. Fortunately, we tried to make first contact when we were still in VFR conditions below the overcast, so we knew right away that we had a problem. Since we departed from an uncontrolled field, we made the decision to circle VFR as we tried to source out the problem. We switched radios, microphones, and frequencies, all with no success.

In fact, a week after our “static” problem, my flying friends did indeed experience a radio malfunction when departing Teterboro. There was a big difference between our failures: they could hear ATC, they just couldn’t transmit. In this case, ATC had something to work with. They squawked 7600 and flew the entire 45 minute flight home using the ident button. ATC would give them an instruction or a frequency change and they would acknowledge with an ident. They continued the flight because they were confident that ATC was aware of the problem and it was clear that they were actually communicating, just not in the traditional way.

Both of our flights did the right thing, given our unique circumstances. There was no doubt that the Teterboro controller wanted my friends out of his airspace in the quickest way possible, which meant for them to keep flying away from TEB. There was also no doubt that my best option was to land and figure out the problem on the ground.

Both experiences got me thinking. My friend and I spent the next week or two playing “what if” games and reviewing radio failure procedures, something every pilot should do on a regular basis. There are a lot of rules when your radio goes silent. The time to have a plan is not when you are launching into a solid overcast in a busy airport environment. Uncontrolled airport radio communications are also tricky when a radio failure occurs, so at least make a plan before departure so you won’t be completely surprised. Brief and be safe.