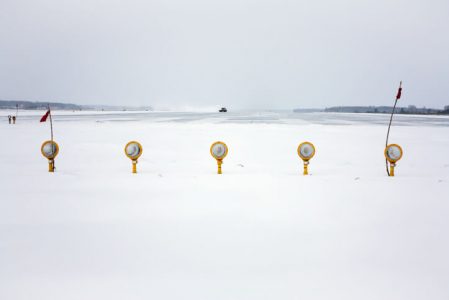 My corporate flight department is not having the best of luck getting into Driggs, Idaho as of late. Don’t get me wrong – it’s a wonderful airport just outside of Jackson Hole, and on a beautiful day in the middle of summer, we wouldn’t have a care in the world. But the boss is not a hot weather kind of guy, he’s a ski junkee, and the mountains of Wyoming/Idaho are his favorite playground in the world. I’d be lying if I said that aviation weather had not been a factor in our many trips out west. Winter weather has kept us on our toes.

I was the proud winner of the “First go around with the new boss” award. We were the surprise recipient of an unforecast winter weather fiasco that came roaring in unexpectedly after we began the full procedure approach. I’m not kidding; we did not expect more than a light dusting, but from the beginning of our casually briefed approach to the inevitable go around at minimums, the visibility went from greater than 10 to virtually zero. And it stayed at zero for the entire flight to our alternate and subsequent hour and a half drive back to our pre-arranged hotel in Jackson Hole!

That same day, the next go-around at the airport was just as unexpected with another crew. The weather was much better than what I experienced on my approach. Nonetheless, an approach was still required. The crew broke out at about a thousand feet or so with good visibility, but mother nature had dumped a whole bunch of snow that morning, and apparently, the plows had not been able to clear it all before our aircraft arrived.

Extreme care must be used when the runway markings are not clearly visible, and that’s not the only danger with winter runway operations. Case in point: In 2015, a Hawker Beechjet 400 collided with a snowplow while landing at the Telluride airport in Colorado. Fortunately, everyone involved escaped without injuries, but the airplane was damaged beyond repair. Since Telluride is a non-towered airport, the center controller asked if they had the weather and NOTAMs. They acknowledged that they had the latest weather but did not answer about the NOTAMs. The controller then gave them descent and sequenced them to the airport.

While all this was happening, airport personnel entered a NOTAM via computer and closed the runway for plowing. Neither the controller nor the pilots had this information. The Beechjet was cleared for the approach and proceeded to cancel their IFR clearance, and here’s where it started to unravel. They did not broadcast or monitor the airport’s common traffic advisory frequency, which was being monitored by airport personnel AND the snowplow operator.

The airplane landed and collided with the plow about halfway down the runway. In this case, it looks like a go-around should have been in order for the Beech pilots. It’s highly unlikely that such an accident would have taken place at a towered airport, but, well, you never know – controllers get busy and make mistakes too.

What can we do to stay safe in the winter?

Winter flying is not to be trifled with; aviation weather can change on a dime, especially in the colder months.

Even if it’s not forecasted, and be prepared for the go-around.

Or even over-communicate when you’re landing at an uncontrolled airport.