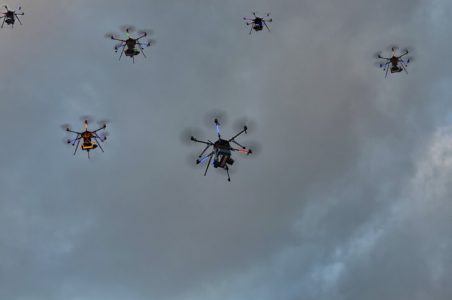 I remember years ago when the very light jet (VLJ) movement started. I was an event representative for the new Eclipse VLJ and I heard it all. “Where’s the rest of the plane”? “Do I have to ship my luggage separately”? But the one thing I heard the most often was the fear that these little jet airplanes were gonna darken our skies and completely overwhelm the air traffic system. I’m starting to hear the same thing now about drones and with the new FAA Regulations recently announced, apparently, the FAA is taking this concern seriously with new FAR regulations.

The new rules governing the remote identification of unmanned aircraft systems (UAS) went into effect April 21, 2021, pushed back from the original date of March 16. The effective date was revised so that the President’s new appointees will have enough time to review the new rule and be ready for any questions that will undoubtedly occur. The rule also addresses the operation of drone flights over people, moving vehicles, and at night.

The “Remote Identification of Unmanned Aircraft” rule requires airborne drones to broadcast identification and location information and also requires the same information from the control station or takeoff point of the aircraft. In other words, the FAA doesn’t just want to know where your drone is flying, they also want to know where YOU are as you control the aircraft.

You’ll be broadcasting an identification number that law enforcement can cross reference with your registration number, as well as your speed and altitude. It’s not just new drones that have to comply – all existing drones weighing over 0.55 pounds are included. There are no exceptions or grandfather clauses here – even if you’re just flying for fun or you made it yourself. Even if you are just flying it indoors, you need to broadcast your location!

To comply, you will either need to retrofit your drone with a broadcast module or only fly it in a specially designated drone flying zone, called an FAA Recognized Identification Area. There are no such areas yet, but the FAA is accepting applications to create these zones in 2022.

I’m not only thinking about those darkened skies when I envision thousands of drones broadcasting their location, but I’m also wondering if my TCAS screen is going to be virtually unreadable at lower altitudes. The unmanned aircraft world is constantly evolving. I’m not sure that any of us know how this is going to turn out, but I don’t think they’re going to disappear like the VLJ’s did. Operators will have 30 months to comply with the new FAR Regulation; I guess we’ll find out then!

PrevPreviousAviation Weather, System Malfunctions and the Accident Chain
NextAviation Airspace Boundaries Are Not To Be Messed WithNext